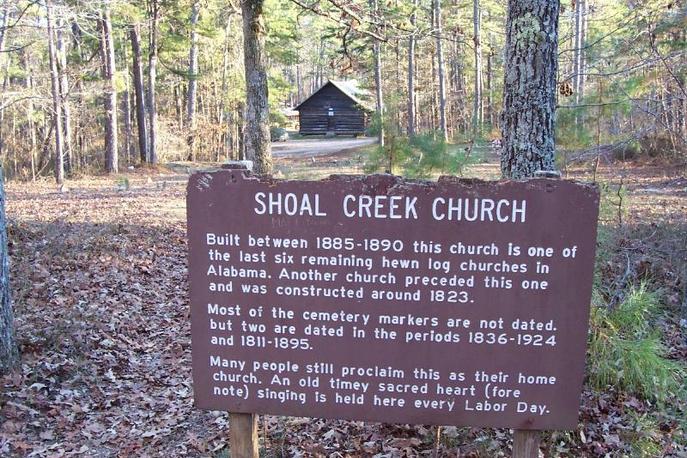 (copied from the Shoal Creek Church website)
The exact events surrounding the beginning of the Shoal Creek Baptist Church are unclear.
Like most of their contemporaries elsewhere, the pioneering people who ventured into new territory in Alabama to homestead and make a life were more focused on their urgent needs rather than leaving a detailed record for posterity.  They knew that if they weren’t successful there would be no posterity.  Among their needs were those of worship and community; met by creating the Shoal Creek Church.

Their legacy to us is borne in our attraction to their homeland and our felt fondness for the last remaining structure of their once-thriving mountain community.

who were these people and from where did they come?
Alabama had been granted statehood in 1819.  The region of east central Alabama was part of the Creek Indian Territory until the Treaty of 1832 led to the vacating of this area by Native Americans.  In the early 1830’s, descendants of European settlers began a rather large migration movement from the Carolinas through Georgia and began to claim parcels of land here for homesteading.  In 1866, the Shoal Creek region was incorporated into present day Cleburne County that was formed from parts of Benton, Randolph, and Clay counties.

Families bearing the names of Thompson, Coleman, Roach, Patty, Holley, Edwards, Jones, Cheatwood, Copeland, Smith, Knighten and others populated these hills and “hollers” in the Appalachian foothills of Cleburne County.  Many were related to each other; all were farmers and hunters, some were loggers and maybe a few were moonshiners.

In their midst, and near a fine source of spring water, they built a log church that still stands, one of a few that remain in the southeast region of the U.S. – or anywhere.  The present church building is apparently the third to have been built at the site.  The first was a Primitive Baptist church erected about 1845.  It was a log building situated on 0.83 acres that included the present graveyard site.  That congregation disbanded probably in the late 1870’s or early 1880’s.  The building continued to stand until about 1905 when it was removed and incorporated into a residence.

narrative history cont’d.
In the early 1880’s a Missionary Baptist Church was built on an adjoining two-acre site.  Robert R. Cheatwood later donated these two acres to the church on August 31, 1889.  That structure soon burned and was replaced by the present building about 1895.  No known records of the church exist before 1897.  We do know that in 1898 there were 63 male members and 76 female members.  Records we do have are quite insightful into the mindset of the church founders and their beliefs.  The minutes have many gaps but it seems meetings were held each month, weather permitting, with worship services in the mornings and church conferences in the afternoons.  The building was also used on occasion as a schoolhouse.

In the early 1900’s families began to leave the mountainous area and move into more accessible (and less unprofitable) areas of Cleburne and Calhoun counties.  Large timber companies were willing to buy the lands, and the populace could live better elsewhere.  The largest of these buyers were the Burt Timber Company and the Alabama Mineral Lands Company.  The federal government later bought large parcels of land from these companies and in 1936, President Roosevelt, by proclamation, created the Talladega National Forest .  This encompassed the entire region of the former Shoal Creek community and church.

Six descendants of church members pose with book of minutes and other documents as part of the application to National Register of Historic Places. Included in the picture are Ellis Thompson, Martha (Mrs. Newman) Roach, Newman Roach, Alvin Jack Roach, and Pink Holley.

A sign on the Pinhoti Trail just above the cemetery was place in the early 1970’s. Note that there are two errors at the bottom: Sacred Harp is four note (or part) music.

sacred harp singing.
There is no record of the formal end of the church fellowship. The church declined due to membership relocation and by 1914 apparently so many had left, that the church no longer met regularly.  The last entry in the existing minutes is dated September 6, 1914.  The last church clerk, R. A. Thompson, presented the minutes to the Cleburne County Library in August 1973.  Since the cessation of the church fellowship, the building has been used occasionally for family gatherings, weddings, or for church services of a local congregation.  It’s most regular use has been for an annual singing.

For at least the last 85 years there has been an annual Sacred Harp Singing at the old church.  For 50 of those years it was on either the 4th Sunday in July or the 4th Sunday in August.  And for the last 35 years the gathering has occurred on Labor Day.  A houseful of people come on each occasion, all bringing lunch, for there there is no host community – the nearest neighbors, discounting deer and turkey and squirrels, live miles and miles away.  See the photos section for several pictures taken over the years of this unique Labor Day gathering.  Literally thousands of tourists visit the old church each year.

[Note:  Much of the information in this article was taken from a historical sketch written by William Lee Jones.  Portions were drawn from other sources and the whole was written by Lee Randall Jones of Roanoke, Virginia, the originator and custodian of this site.  Lee Randall is the nephew of William Lee, and is the son of Joseph M. Jones, the secretary-treasurer of the Shoal Creek Church Preservation Society.  Readers might like also to know that the Jones family has another strong tie to the Shoal Creek area — they still take part every fall in a squirrel camp-hunt that has continued  for more than a hundred years. But that’s another story….( this note submitted by Joseph M. Jones of Huntsville, AL)]

(NOTE: All of the above was furnished by Mr. W. Joel Thompson, former Cleburne County Agent-Coordinator.  The rules of decorum were contained in the minutes.  The source for this information is Mrs. Sue Cheatwood Ralls of Homewood, Alabama via Mildred Perry Miller of Chattanooga, Tennessee.)