Location: Hike north on the Pinhoti to the 7.9 ~ Coleman Lake Trailhead.

Several years ago, after the lodge burned down, a friend took me there to take a look around. It made me think about Ernest Hemingway and all of the old Hunting Lodges up north.

So, since it was only about a mile or so off the Pinhoti, I though the history of this place needed to be included in the Pinhoti story. The Pinhoti was constructed in this area in the early 70's and the Lodge was still operating until at least 1985.

Billy Craig- I worked there in 1984/85....Most people never saw me that much because I was behind the lodge cooking steaks and bbq chicken on the outdoor grill....When they closed I had to wash the piles of WW2 Navy Surplus aluminum trays....Lived there during the week as security guard and cut the hickory wood for the grill and wood for the fireplace.

Billy Craig- And they were WW2 Navy Surplus

post- Anything you wanted, as long as it was chicken or steak.

post- I remember when the Scouts would go there for camping.

Billy Craig- I lived there full time in 84 and 85.... Kept the place secure during the week and on Saturday and Sunday cooked the steaks and BBQ chicken out back on the grill.... washed the navy surplus aluminum trays and cleaned the dance hall after we closed.... During the week the forest rangers would come by and drink coffee and curious campers from Coleman Lake would come over every now and then.... loved it up there in the middle of nowhere.

post- Had many good times up there with good friends!

post- Part of my family. Went there for awesome steaks.

post- It says call Jerre Watson...is that Dr. Watson or his son, maybe?

post- On my Aunt Reba Watson Myers side of the family. My uncle, Reuben Myers, took us there all the time. Is it still there?

post- I was married and living in south Alabama by then. My parents were still in Saks. Thanks for the update!

post- he was probably one of the children the Doctor (my grandfather) delivered. Nancy Watson Gautney.

post- He was probably as old as your grandfather.

post- Would go there for the "Brothers Bash," anyone remember that?

post- J.P. was a storyteller. Loved to listen to him. Miss those days!!!

post- If you played the old piano dinner was on JP.

post- Our Band we had in High School played there it was me, Robbie Anderson, Sid Brown, and Chris Garmon, man that was a long time ago.....

post- I played in a band that played on Saturday nights in the 80's. I think we were the last one to play there before it burned. Food was fantastic!

post- We were so young when we played here probably 16/17 years old, I wish that someone would build another one!!'

post- This is in my neck of the woods. You pass my house on your way to Coleman Lake. Lots of traffic with campers headed that way every weekend and holidays.

post- My mom's family was from Heflin, and they all live around there. 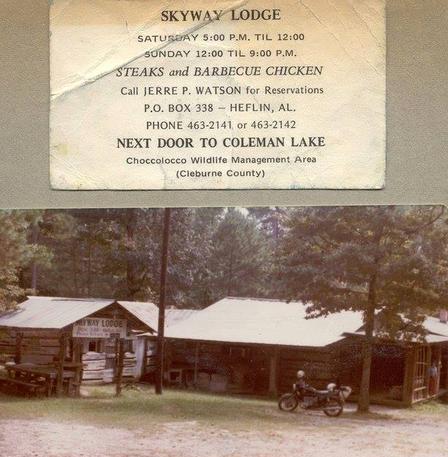